Steam on the Road

Having heard about (and missed) the Searle families epic London to Brighton journey with the “big load”, I was pleased to hear they had decided to go to the next level and deliver the load and trailer back to The Great Dorset Steam Fair by road.

The road train consisted of the mighty Maclaren Road Loco no. 1652 “Boadicea” as main load engine, Burrell no. 3829 “His Majesty” as trace, and Fowler no. 8920 “The Great North” as braking engine, hauling the GDSF ex Pickfords well trailer with a authentic load of a huge Fuller tansformer – rumoured to be full of soil just to hold the Mac back a bit!

So I found myself driving down the A34 at 4am on the bank holiday Saturday morning, thinking I must be mad. They were due to be coming out of Southampton around 5am in the morning, so I had timed it that I could catch them at this point and follow them on up the A27 to Romsey and then on through Whiteparish towards Salisbury, with a few good hills to watch the spectacle.

After getting lost in Southampton and dodging the remaining Friday night party goers staggering home, I finally found them on the edge of Southampton. To my Suprise, the Fowler wasn’t on the load. The Burrell had been moved to the back, leaving the Maclaren on the front. 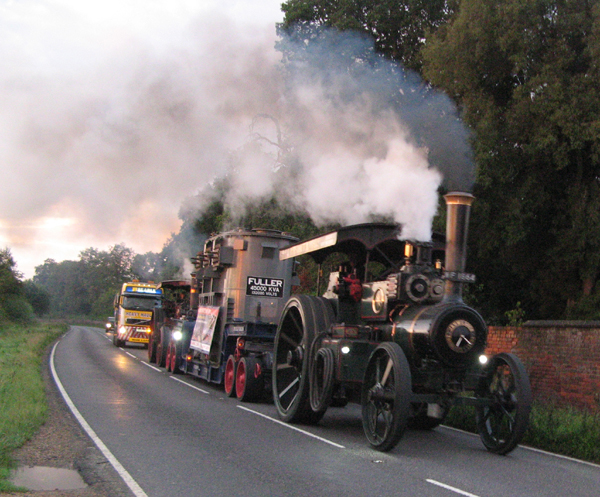 Bowling along the A27 between Southampton and Romsey

There had been a mechanical problem with the Fowler at the first water stop in Southampton, which prevented it continuing with the load. As a movement order had to be obtained for the journey, the others had to carry on, leaving the Fowler behind.

Tackling a hill near Romsey just after sunrise

With one engine down and some fairly hilly terrain, this provided some really spectacular sites as the engines worked their way to Salisbury.

Stopping for water and an oil up

A t-piece stand pipe was used to fill the engines. The backup crew told me that both the Fowler and the Burrell could be filled in the time it took to fill Boadicea – which goes to show how much of the work the big Mac was doing. The team spirit of the gang for such an undertaking was clearly evident when stopping for a chat at the waterstop.

The engines tackle a gradient on the aproach to Whiteparish. “Boadicea” sounds fantastic. Notice the increase in power when the “Double high” is given. With gear changes needed at times it was great to see the communication between drivers through whistle signals and intuition – no walkie talkies or other modern rubbish.

Approaching Whiteparish with the backup vehicle stacked with coal

The big Volvo tractor unit followed the load at all times, and a van was used to go ahead and warn motorists of what was coming and stop the traffic at junctions.

Flying along the A27 on the approach to the A36. The 100 mile plus journey was made over 3 days with a great deal of it being done in the early hours of the morning to avoid holding motorists up too much.

It was great to see real working steam heavy haulage in 2011, and a joy to see proper engine driving skills being demonstrated. It was also great to see the Fowler back in action a few days later. Full credit to the Searle family and crew.

1 Response to Steam on the Road